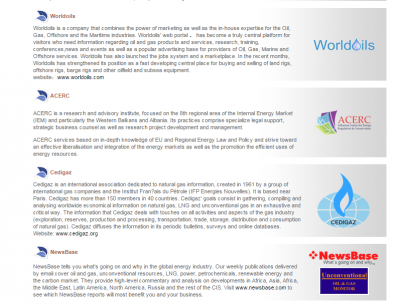 The ACERC participate at conference as official supporter 2015 given the
possibility of 20% off discount tickets to all interested parties that want to
join the activity.

In disposal for
any further assistance you might need, thank you
again for following!

Global Summits organiser, IRN is delighted to announce that the 4th Balkans Oil & Gas Summit will be held in Dubrovnik, Croatia.

This year’s event, originally to be held in Athens, Greece, will now be hosted in Dubrovnik, Croatia with the full support of the Croatian Ministry of Economy and the Croatian Hydrocarbon Agency to bring to the Summit’s delegation a highly valuable Balkans Summit on 23rd-25th September 2015.

Croatia has been attending and supporting the senior level meeting since its origination in 2012. Here’s what Alen Leveric, Deputy Minister of Economy said about the Balkans Oil & Gas Summit: “Since 2012, we had the unique opportunity to annually report and promote all development stages of one of the most important Croatian strategic projects – exploration and exploitation of hydrocarbons (onshore and offshore).

In June 2015, Croatian government published that three companies (Vermilion Zagreb Exploration, INA and Oando PLC) will share six licences to explore for oil and gas in Croatia’s northern Drava river basin and in the east of the country.

With this in mind, Croatia is definitely on their way of becoming an energy leader in the south-eastern Europe.” Alen Leveric, Deputy Minister, Ministry of Economy, Croatia.

Many international and national oil companies have already confirmed their participation in the Summit with the organisers expecting the attendance of 200 senior level executives.

Highlights of last year’s Summit can be viewed at the official YouTube Channel of the organiser,https://www.youtube.com/user/irnInternational.

More information about the Summit is available on the website: www.balkanssummit.com and released bimonthly in the Summit’s newsletter to which someone can subscribe here.